Anatolia’s extra-curricular program demonstrated resilience and creativity “defeating” the Covid-19 pandemic. During the school’s lockdown, many of our advisors took the opportunity to meet with their club members online, and some even prepared them for online competitions. Many of our students jumped at the opportunity offered to them to engage in their favorite clubs, exhibiting immense enthusiasm and dedication, against all odds. The Student Services Office and Anatolia’s administration would like to extend their gratitude to all the club advisors who continued to offer meaningful experiences and time for growth and development to our students during these unprecedented times.

Some of the club initiatives were the following: 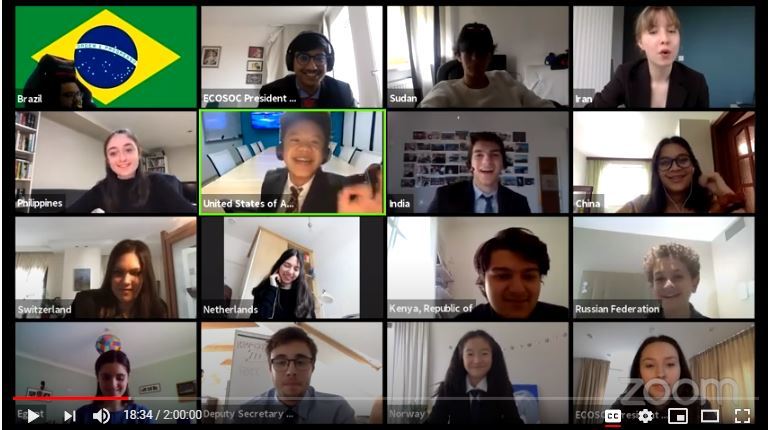 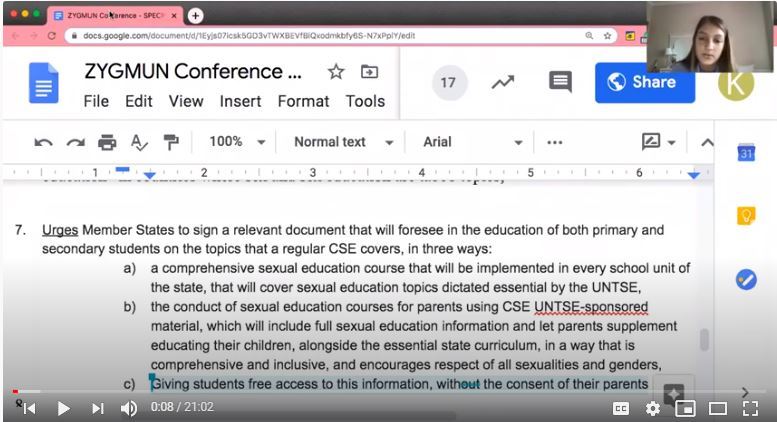 Eleven Anatolia students attended the 3rd Annual Session of Zygmunt MUN, which was hosted online by the American School of Warsaw, because of the COVID-19 situation around the world. The conference’s theme “Good Health and Well-Being” has never been more relevant. Representing various countries in different committees, our students spent two full days debating issues, such as eradicating the use of torture as a means of interrogation, ensuring food security to promote sustained economic development, the situation in Mali and in Libya, and many more, drafting resolutions and making speeches. All of it in virtual rooms from the safety of their homes while MUN Director Pieter Derluyn moved from room to room observing the students.

Greek Rhetoric Debate Reaches the Semi-Finals of a Virtual Greek Debate Tournament, May 3 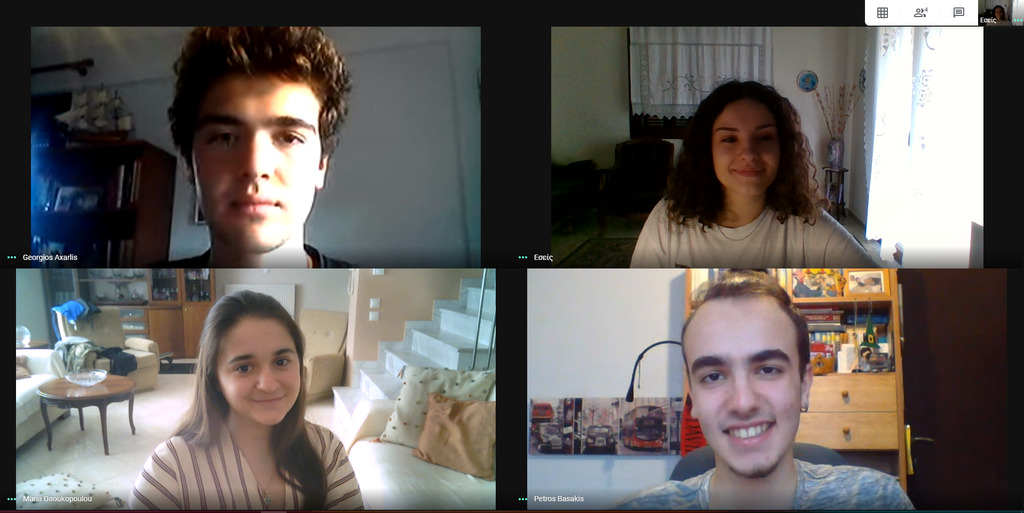 Four members of the Greek Rhetoric Debate club (George Axarlis, Petros Basakis, Maria Daoukopoulou, and Iliana Axarloglou) represented Anatolia in the virtual Greek Debate tournament organized by GEL Intercultural Education of Evosmos on Sunday, May 3rd, against 7 other teams from different schools, including Pierce College, Mandoulides, and Avgouleas-Linardatos. Congratulations to our students, who reached the semi-finals, where they debated the motion “True freedom is the result of personal choice.” Thank you to their coaches, Kleri Mitrouli and Alexia Seridou, who held many online meetings with the students discussing various topics.

IB Company Program Presents Its Enterprise GRID at the 15th Panhellenic Competition, May 8 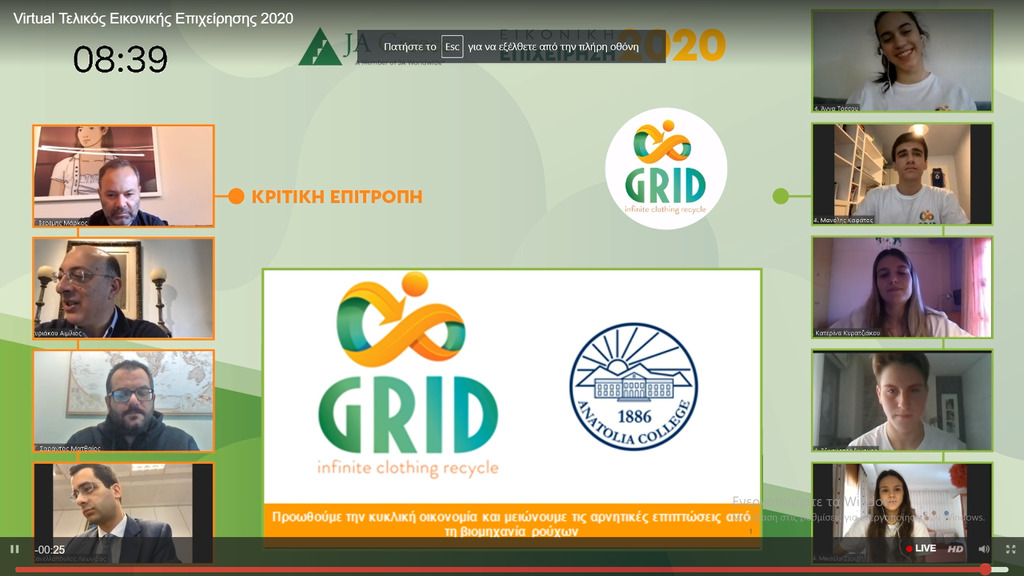 Throughout the quarantine, club members continued to work hard on the presentation of their GRID virtual enterprise, which was presented in the finals of the 15th Panhellenic Competition “Best Virtual Student Enterprise 2020” on May 8th. Their strategy consisted of presenting the problem of pollution of the fashion industry and then of their virtual enterprise as the solution to this problem, outlining the benefits of GRID for both companies and consumers. Then, they briefly presented their marketing strategy and their fiscal predictions for their service’s viability, showing how their enterprise is more cost-effective and more beneficial than that of their competitors, especially for the environment. After their presentation, students were interviewed by a four-member evaluation committee. Congratulations to the whole team for their hard work and commitment. Thank you to their advisors, Athina Lionta and Antigoni Pyrovetsi, and to their mentor, Dr. Apostolos Egyptiadis. 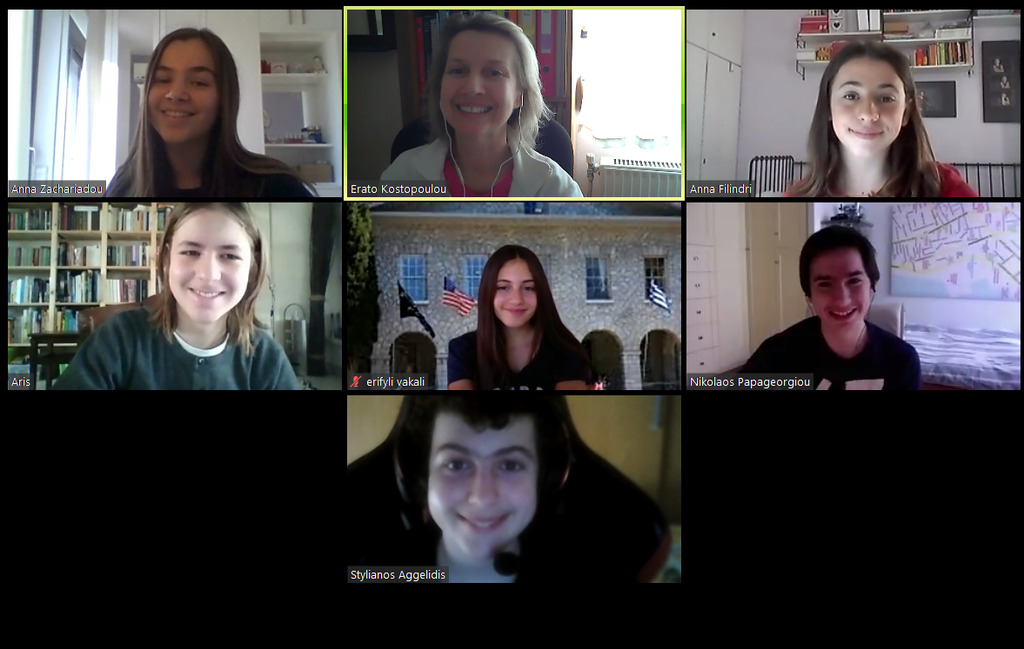 Four members of the Young Debaters club and two of the English Debate club participated in the 3rd English Debate Tournament, organized by GEL Intercultural Education of Evosmos, on Saturday, May 9th. Team LOG!C (Stelios Angelides & Nicholas Papageorgiou), the Whistle-Blowers (Erifyli Vakali & Anna Filindri) and Asquared (Anna Zachariadou & Aris Tsinganos) competed against 7 other teams, while Erato Kostopoulou, Andrew Harrison, and alum Magda Petmeza served as judges in the tournament and helped in the students’ rigorous preparation. Congratulations to team Asquared and Team LOG!C for reaching the semi-finals, and to Aris Tsinganos, who was voted Best Speaker, Nicholas Papageorgiou, who ranked 4th, Stelios Angelides, who ranked 7th, and Anna Filindri and Erifyli Vakali, who tied in 8th place. 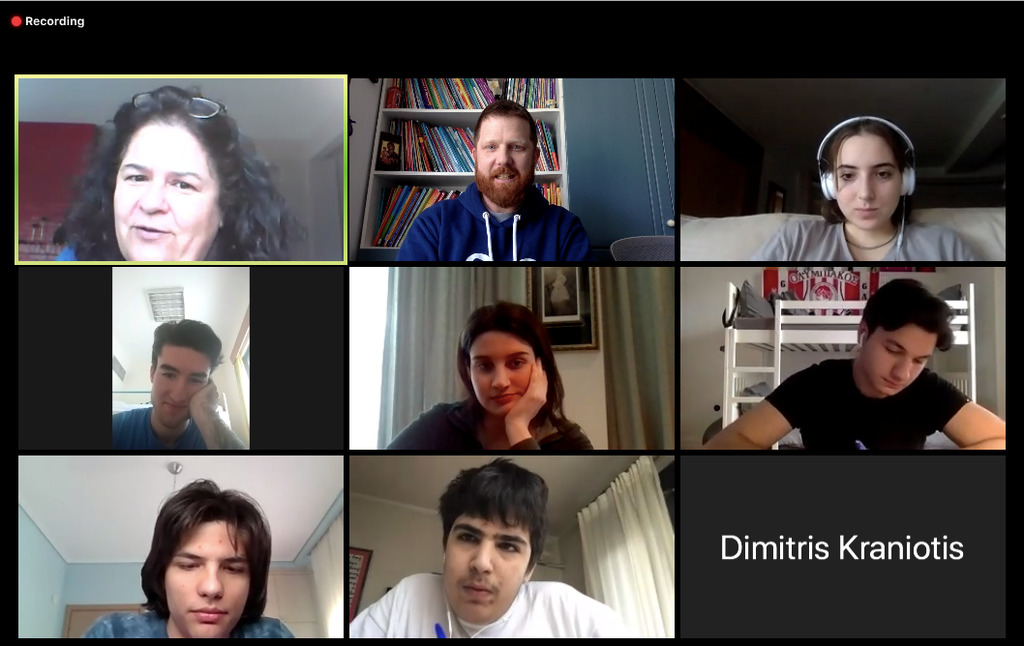 Students of the English Debate club debated the motion “This House Supports the Creation of an Independent Kurdish State” through their computer screens for coach Andrew Harrison, judge Leda Antoniou, and alum Magda Petmeza.

During the COVID-19 pandemic, two student club advisors, Elisavet Firinidou and Marilena Samamidou, together with an elementary school student, Athanasia Firinidou, “met” with 30 enthusiastic 2nd form members of the Introduction to MUN club both synchronously and asynchronously under the guidance of advisor Eleni Zika. The students coached the participants in public speaking, assigned research on various topics and countries, advised them on writing position papers, draft resolutions, and policy statements, and hosted informative group and individual meetings when necessary. Their goal, set for June 12th, is to host a final simulation of a committee meeting, where delegates will discuss “Country Recovery after Covid-19.” We are very proud of our students’ leadership initiative and the wonderful opportunity for growth that they offered to our younger student body.

Thirty members of the Greek Theater club started online meetings as soon as schools closed in preparation for next year’s performance of Federico Garcia Lorca’s Bernarda Alba’s House. Roles were distributed and rehearsals began in virtual meetings of the cast members with director Thanasis Fotiadis and his associates. 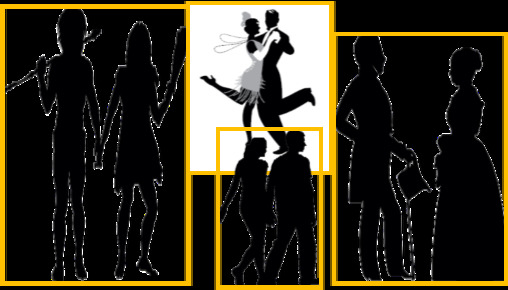 Even though their stars did not shine on stage this year, the members of the Junior Drama club met online with director Elena Parissi to discuss the details of their performance of Brian Taylor’s The History of Dating, which has been postponed for mid-November because of the pandemic. In subsequent meetings, they read through their play. 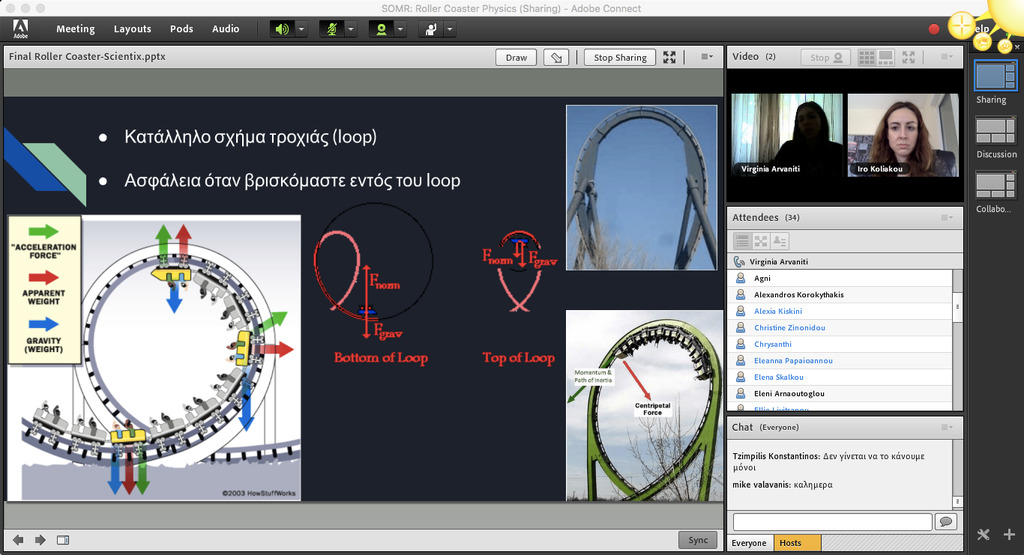 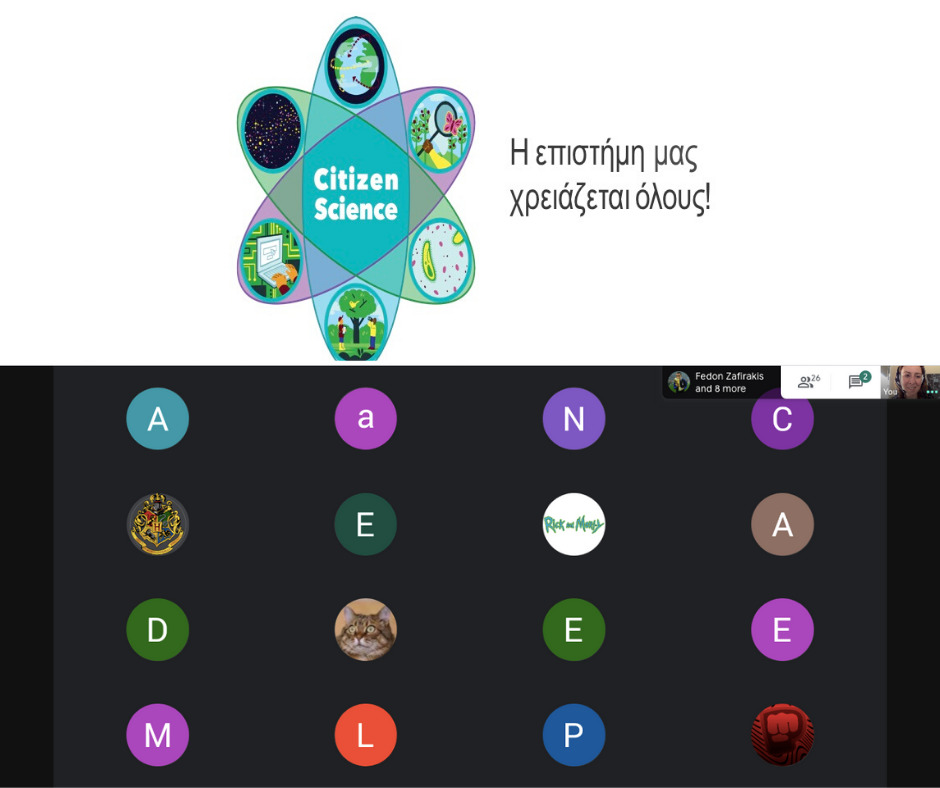 After a series of STAR talks, offered by three IB students under the guidance of Scientix Ambassador Iro Koliakou, and Virginia Arvaniti, 34 Anatolia students met for a workshop on Roller Coaster Physics, part of the STEM Discovery Week, under the auspices of the European Network and Scientix. The students engaged in various STEM activities using online virtual labs and simulations. The group met every week until the end of the quarantine and investigated different science themes each time, such as Citizen Science. We thank Iro Koliakou for her initiative. 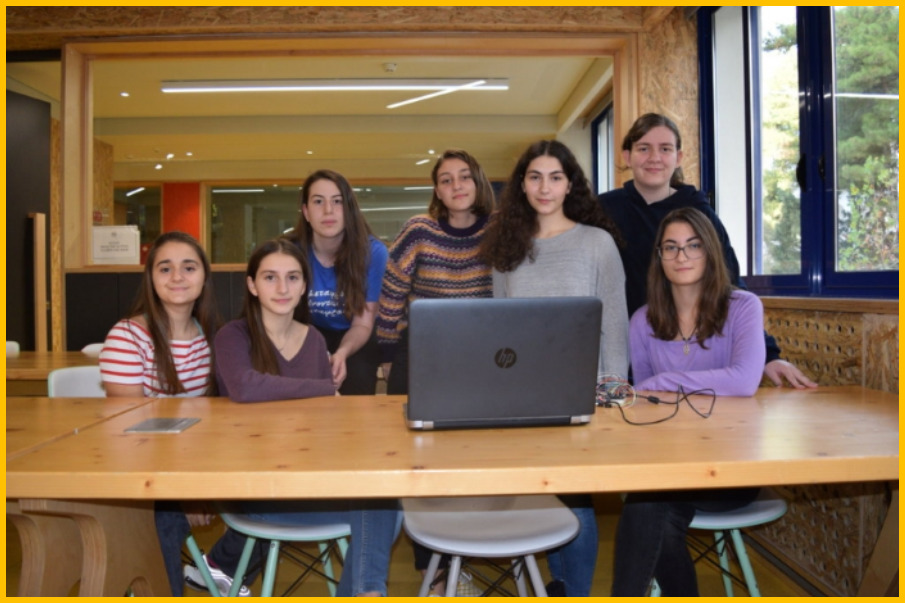 The members of team Project Outreach and team Aurora, which was selected with 8 other Greek teams to participate in the national competition CanSat in Greece, continued to work on their space missions and their satellites and meeting with their advisors, Athinodoros Bandis and Iro Koliakou, every week online. The winning team of the national competition will take part in the European competition CanSat in Europe, organized by the European Space Agency. The all-girls Aurora team, passionate about robotics, programming, and astronomy, consists of Sofia Amanatidou, Christina Gkini, Maria Daoukopoulou, Anna Daskopoulou, Eleni Daskopoulou, Maria Eleni Kapetanaki, and Ariadni Kalliopi Papamichou.

Club members met with advisor Danai Kyriaki to discuss the impact of Covid-19 on the environment, the climate, or a specific species. Each student presented the case s/he had researched and the group discussed both the negative and the positive effects on the environment as well as the ways in which communities can learn from these cases and alter behaviors to more sustainable practices. 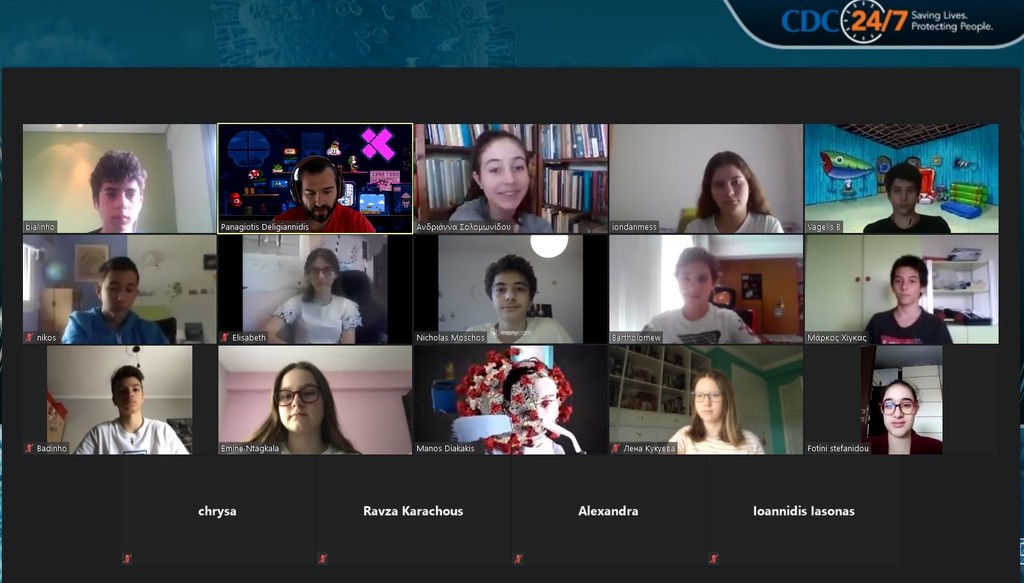 The members of the Biology club became familiar with epidemiology in the first-ever e-biology meeting with advisor Panagiotis Deligiannidis. Using an interactive app designed by the CDC, they assumed the roles of Disease Detectives, investigated realistic scenarios of possible outbreaks around the globe, and made critical decisions about the handling and prevention of a pandemic. Besides relying on strict scientific data, the students had to make decisions considering bioethical and social responsibility issues. The students’ daily experience with the coronavirus and their enthusiasm led to serious discussions and to solutions that could be implemented in everyday life. 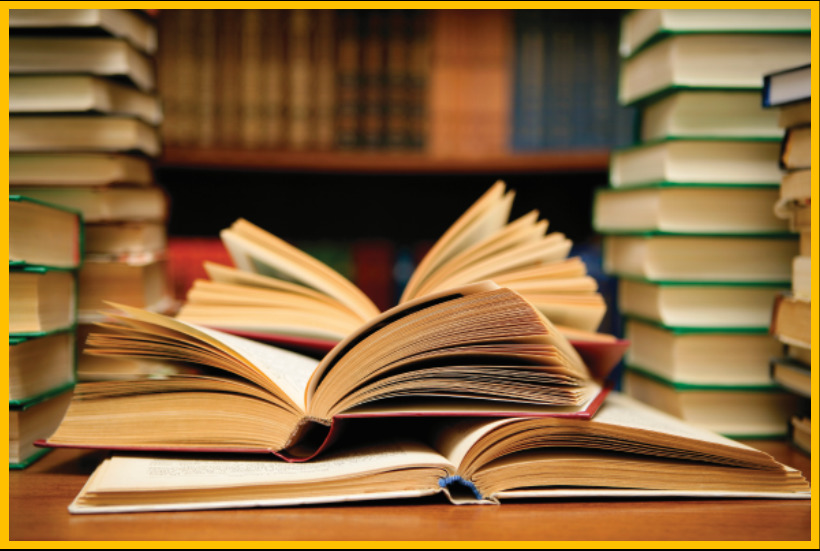 The members of Stories continued to meet asynchronously and synchronously with their advisor Eleni Hatzimavroudi to work on various literary pieces. 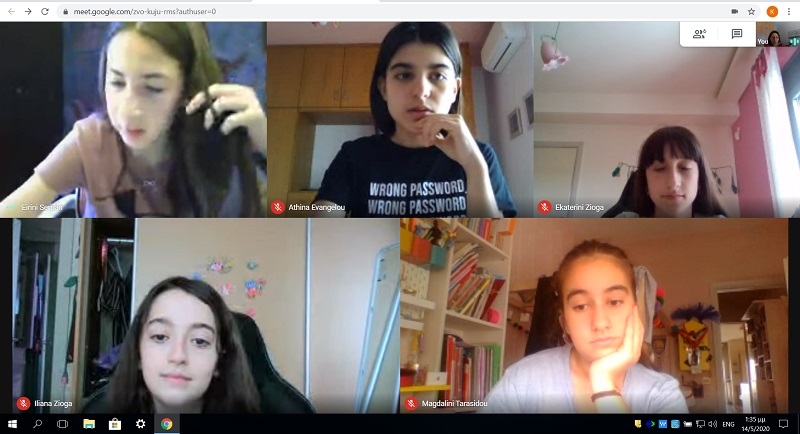 Students in the Silk Screening club continued their creative artistic endeavors after receiving advice and ideas about painting on silk from their advisor, Konstantina Goula.