“The Dramatics”, the new production from the Manhattan Theater Club

5th-grade students participating in the Manhattan Theatre Club (MTC) program this year responded to the challenges of working online as they collectively wrote a play then shifted to the classroom to rehearse for a play which they ultimately performed online. The twenty-one students cooperatively wrote a play called “The Dramatics” about a group of thespians who, much like the writing team, lose their theatre space several weeks before they are to mount a production.

Writing “a whole new play from scratch,” as one student described it, was challenging: from developing characters to polishing the final draft, the writing process was aided by guidance from theatre professionals at the MTC education program in New York. One student noted that “try[ing] to sound sophisticated and show that we have a broad vocabulary” isn’t realistic when writing dialogue. Another valuable lesson was learning to revise and cut unnecessary information. Our students had no problem creating verbal battles between characters but then had to cut whole pages of script to keep the scenes dynamic and move the plot forward.  Students took advantage of feedback from both their teacher, Jodi Hill, as well as their teaching artist at MTC, Joe White. 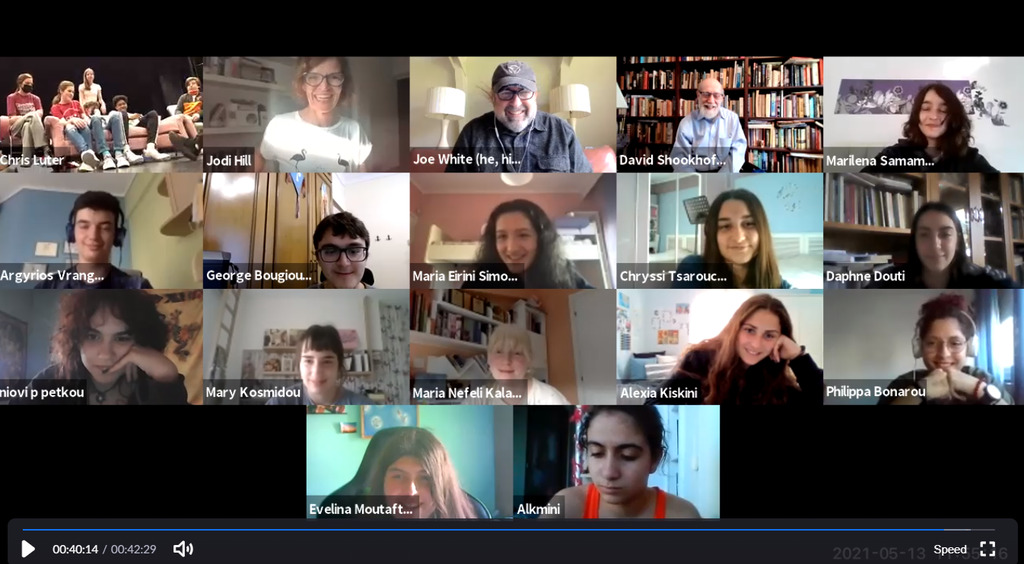 The polished play was sent to Collierville High in Tennessee who performed it for Anatolia students and the teaching artists at MTC. As a deeply moved David Shookhoff, MTC’s education director, noted: “The Dramatics” was both humorous and touching. Characters battling each other for roles and attention, struggled for a venue, bringing to life the very situation theatre companies on Broadway and around the world have been living the past two seasons. The students at Anatolia praised the performance, while the actors at Collierville High thanked Anatolia writers for giving them a challenging and engaging script.

A few days after completing the writing, Anatolia College began rehearsals and production planning on “A Tango with Pride” by Kerry High School in Texas. Anatolia’s marketing team created a playbill and included this blurb.  According to Fay Kamarianou and Chrysi Tsaroucha:

It’s November 9 at Westhill Christian School’s library.  This library has more than 13.500 books, but only one book’s sudden delivery at 9:00 am attracted everybody’s attention. A book that talks about love but provokes conflict. A book that is immoral... or maybe not? However, the real question is: Can a Christian School reconsider its notions of Christian ideals and accept this ordinary book? Some people will stand for it and others against it, but who ultimately decides if its fate is to find a place in Westhills library?

The third bell has just rung; the curtains open on Lisa’s office in the library.

And the performance begins…

Like the actors in rehearsals, the design team also explored the dynamics and themes of the play. Realizing the production would be online was a temporary disappointment. Students quickly recognized advantages to online productions: for the designers, there was new freedom—costumes and set designs weren’t limited by budget since they were designs meant to guide the vision of the play. For the actors, blocking and use of lighting were lost, but they focused on facial expression, articulation, and use of voice to express emotions.

The rehearsal process was a new set of challenges that were not without rewards.